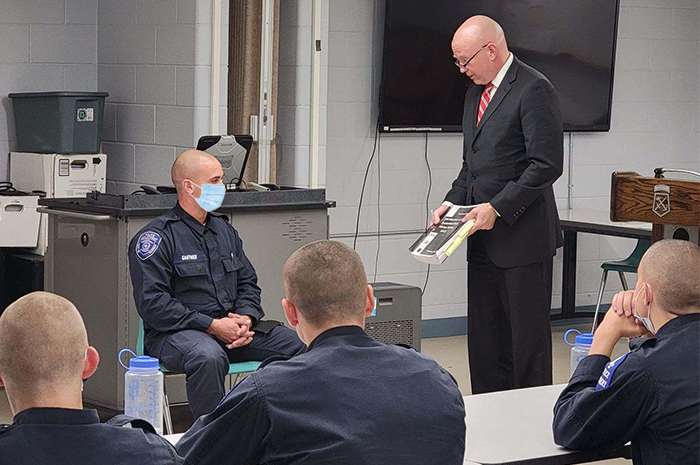 Recognizing Attorney S. Joshua Macktaz’s 30 years as both a RI State prosecutor and now top criminal defense lawyer, academy instructors knew he would be the best choice to show the cadets what they will face in Court as police officers when a person arrested for DUI hires an aggressive and experienced DUI defense lawyer.

The Rhode Island Municipal Police Training Academy (RIMPTA) was established in 1969 to train and certify all municipal police officers in every city and town in the state of Rhode Island.

Additionally, the Academy was given the responsibility of training police officers from several state agencies that have law enforcement powers.

The Rhode Island Police Officers Commission on Standards and Training (POST), with the approval of the Commissioner of Public Safety, establishes the courses of training and sets rules and regulations relative to the education, physical standards, and personal character of candidates and trainees. Instructors from the Academy are responsible for teaching all aspects of police work during the fifteen (15) week program.

Two (2) of those weeks are devoted solely to instructions/lessons on drunk driving investigation, ending with a mock DUI trial so the cadets can see what an actual DUI trial would look like in the real world. During the two (2) weeks cadets are taught about all aspects of a DUI investigation, including but not limited to:

At the end of the two (2) week intensive DUI instruction, the Academy sets up a mock trial to show the cadets what a DUI trial would look like. In each of the three (3) mock trials, one lucky cadet is chosen to study and adopt a DUI fact pattern created by the Academy instructors.

Then, with the assistance of a Rhode Island Traffic Tribunal Magistrate (the judge) and a RI Attorney General (the prosecutor), a mock trial is conducted with the lucky cadet taking the witness stand. Attorney S. Joshua Macktaz was asked to play the role of the criminal defense lawyer at the trial, and he certainly delivered on that request.

Once the mock trial was over (side note: Attorney Macktaz’s client was found NOT guilty by the Judge in all 3 mock trials) Attorney S. Joshua Macktaz was available to answer the numerous questions posed by the audience of cadets about the mock trial they had just witnessed.

Academy instructors and the cadets all believed this experience would prove invaluable in their future DUI investigations, and all were incredibly grateful that Attorney S. Joshua Macktaz donated his time to participate in the mock trial.