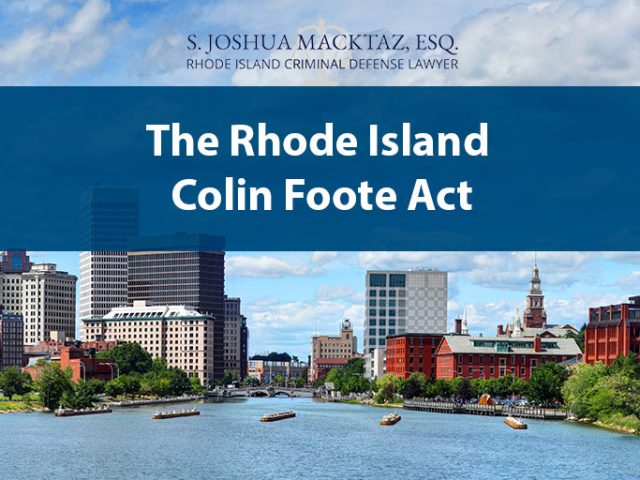 Rhode Island enacted the Colin Foote Act in 2010. This law states that those who violate multiple traffic offenses can receive heightened penalties. The purpose of this law is to prevent repeated traffic violations and keep Rhode Island roads safer. However, in some instances, the Colin Foote Act can be used to make examples out of drivers in unjust or inappropriate ways. It’s important to speak with a Rhode Island traffic violation attorney as soon as possible if you’ve received multiple traffic tickets over a short period of time.

We all want drivers to be safe on our roads. But if you’ve been driving in Rhode Island for a long time, it’s not uncommon to have multiple traffic violations. Receiving multiple traffic violations over a short period of time can lead to significant penalties and punishments. This is primarily due to the onset of the Colin Foote Act. If you’ve been charged with violating the Colin Foote Act, here’s everything you need to know:

Where did the Colin Foote Act come from?

In 2010, motorcyclist Colin Foote, 27, was killed by a motorist in Charlestown. The driver sped through a red light when she struck Colin on his motorcycle. When Colin’s family discovered that the motorist had 19 prior traffic violations, they dedicated their lives to passing Colin’s law, which targets drivers with multiple traffic law offenses. Colin’s law also urges the DMV to send driving records to the Rhode Island attorney general in order to be flagged for habitually violating traffic laws. To learn more about what the Colin Foote Act is, how it was developed, and what to do if you’ve been charged with violating it, contact our law firm today to speak with a traffic ticket attorney.

What is the law regarding the Colin Foote Act in Rhode Island?

Rhode Island traffic courts and municipal courts impose severe penalties for drivers who commit multiple moving violations in a short period of time (specifically 4 violations within an 18 month period).  If you have been charged with violating the Colin Foote Act, you need a skilled Rhode Island traffic violation lawyer to help avoid these harsh penalties.  This is the Colin B. Foote Law in its entirety:

(a) Every person convicted of moving violations on four (4) separate and distinct occasions within an eighteen (18) month period may be fined up to one thousand dollars ($1,000), and shall be ordered to attend sixty (60) hours of driver retraining, shall be ordered to perform sixty (60) hours of public community service, and the person’s operator license in this state may be suspended up to one year or revoked by the court for a period of up to two (2) years. Prior to the suspension or revocation of a person’s license to operate within the state, the court shall make specific findings of fact and determine if the person’s continued operation of a motor vehicle would pose a substantial traffic safety hazard.

(b) At the expiration of the time of revocation as set by the court pursuant to subsection (a) above, the person may petition that court for restoration of his or her privilege to operate a motor vehicle in this state. The license privilege shall not thereafter be reinstated until evidence satisfactory to the court, following a hearing, establishes that no grounds exist which would authorize refusal to issue a license and until the person gives proof of financial responsibility pursuant to chapter 32 of this title.

(c) For the purposes of this section only, the term “moving violations” shall mean any violation of the following sections of the general laws:

What are the penalties for violating the Colin Foote Act?

Why would I need to hire a defense lawyer if I’ve been charged with violating the Colin Foote Act?

The Rhode Island Traffic Tribunal and Municipal Courts are committed to holding up the Colin Foote Act and placing the harshest penalties possible on offenders of this law. However, the attorney general and law enforcement will have to provide strong and powerful evidence that proves you have broken this law. Without strong evidence, there’s room for negotiating the penalties and fines. With a skilled and experienced traffic ticket defense attorney on your side, you may even be able to have these traffic violations dismissed. It’s never advised to handle a Colin Foote Act violation on your own. A Rhode Island traffic ticket defense attorney can provide options that you didn’t think you had.

S. Joshua Macktaz, Esq. has years of experience defending traffic offenders and has handled multiple Colin Foote Act cases.  Remember that no two traffic ticket defense attorneys are the same. Joshua will review and oversee your case and he will be the lawyer standing next to you in court. Contact the law office of S. Joshua Macktaz, Esq. today to discuss your Colin Foote Act traffic case.