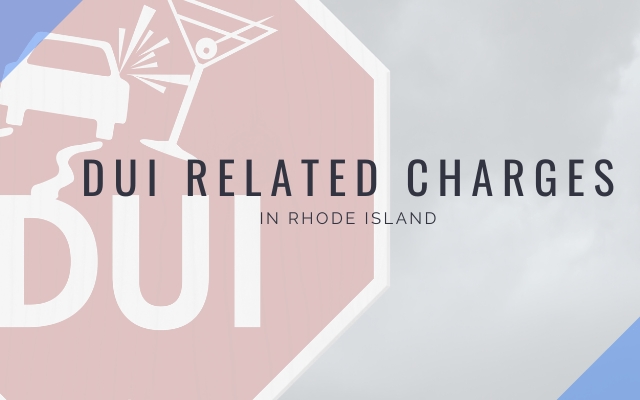 Being arrested for a DUI is a scary and stressful situation alone. But that stress multiplies exponentially when other factors are involved. There are several charges that are often paired with a DUI offense. These DUI related charges can complicate your case and without an experienced attorney on your side, you could end up losing certain rights.

Alone, a first offense DUI conviction can really upend your life as you know it.

A person convicted of Driving Under the Influence-First Offense (BAC .08 – .15) would be subject to a fine of five hundred ($500) and shall be required to perform twenty (20) to sixty (60) hours of public community restitution and/or shall be imprisoned for up to one year. The person’s driving license shall be suspended for a period of three (3) months to eighteen (18) months. The person convicted shall also be required to attend a special course on driving while intoxicated or under the influence of a controlled substance and/or alcoholic or drug treatment for the individual.

Additional convictions, can be crippling.

Facing charges related to driving under the influence can be unsettling. In theses circumstances the individual charged with the crime is nervous and confused about the process of criminal defense. Our firm provides assistance for these types of cases. We represent clients and defend them against DUI, DWI, reckless driving and BUI charges. We provide aggressive representation and utilize our exhaustive criminal defense background to mount solid and successful defenses for our clients. Drunk driving offenses often carry serious consequences. Related charges can lead to license suspension or termination, jail time, and large monetary fines.

Oftentimes, with an experienced lawyer, a DUI charge can be reduced to reckless driving. Reckless driving as a first offense is a misdemeanor. You can face up to a year in a jail and/or up to $500 in fines.A second offense, or anything after that is considered a felony. You face up to 5 years in prison and $5,000 maximum in fines.

If you receive a conviction for refusing a breathalyzer consequences can include up to a five-year license suspension, $1000 in fines and jail time.

If you get arrested for a DUI with a minor under 13 years of age, you will also be charged with child endangerment. You could face up to one year in prison if convicted for the first time and a two year license suspension. Consequences are worse if you’re involved with family court and child custody matters. Child endangerment could cause you to lose custody or visitation rights.If you’re not involved with a family court matter, DCYF still performs an investigation and can remove the child from the home if they see fit.Child endangerment charges are not to be taken lightly especially when paired with DUI charges.

Unfortunately, one of the most serious charges associated with DUI is vehicular homicide. Vehicular homicide is when a person kills a person while driving in reckless disregard of the safety of others. If convicted you could face 5 to 15 years in prison, $5,000- $10,000 in fines and have your license revoked for up to five years! For obvious reasons, vehicular homicide in connection with a DUI is an extremely serious charge and hiring a good lawyer is essential for your case.

What Should I Do If I’m Charged With A DUI

If you have been charged with a DUI or DUI related offense it is imperative to secure representation by an experienced DUI defense lawyer who is well versed in the field. Having a knowledgeable attorney to handle your case means securing the proper defense for you. DUI Attorney Joshua Macktaz has successfully defended hundreds of cases. He will put his depth of experience with drunk driving offenses to work for you. Everyone deserves the proper legal counsel to represent their rights and that includes you. To schedule a free consultation and discuss your case with Rhode Island DUI Lawyer S. Joshua Macktaz, Esq. call (401) 861-1155.