Home » What Happens in A Rhode Island DUI Arraignment?

What Happens in A Rhode Island DUI Arraignment? 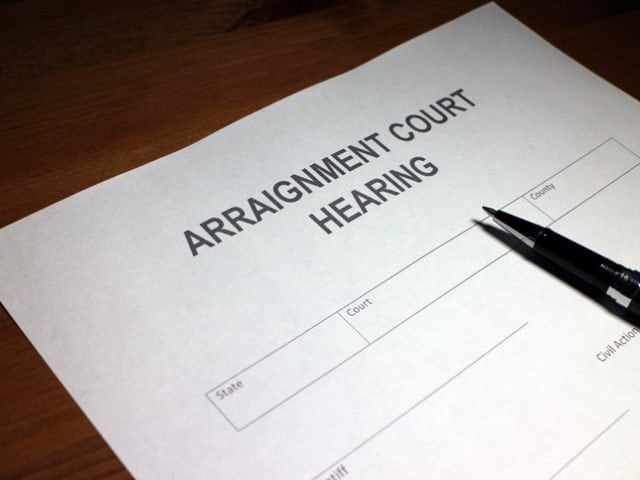 An arrest for a DUI means you’ve landed yourself in some serious trouble, and there are several things that are going to happen. An important part of the process is your Rhode Island DUI arraignment.

Obviously, there is a lot on the line with a DUI. You will likely lose your license, must pay a fine, and there may even be jail time. So, you need to know what to expect, and what you can do to ensure you walk away with the lightest possible sentence.

After traveling to the police station and going through the booking process for your arrest, one of the first steps in the legal procedure consists of the arraignment.

An arraignment usually occurs within 72 hours of your arrest. During the arraignment, you stand before a judge or magistrate to hear the charges against you. At this time, you must also answer some basic questions and submit a plea. Afterward, you’ll find out what’s next for you.

For these reasons, it’s very important that you know what an arraignment is and what to expect when facing one yourself. You also need to know how to be sure you are properly represented and get the best outcome.

Read on for everything you need to know about preparing for an arraignment, how a lawyer can help, and what you can expect to follow.

What Is a DUI Arraignment?

A DUI arraignment is the first time you stand before a judge after an arrest for a DUI. This is the point where you will hear the charges against you. You can enter a plea of either guilty or not guilty. You are then going to find out what the implications of your arrest are likely to be and when your next court date will be.

Who Attends a DUI Arraignment?

The main people at a DUI arraignment include:

Also present are other defendants, if applicable, and sometimes members of the public can attend.

Attending a video arraignment may be a requirement. Some courts conduct arraignments by video to save time and money transporting the defendants to and from the courtroom. It allows them to speed up the arraignment process. There is a 48-72 hours expiration, depending on the date of the arrest.

Should I Get a Lawyer Before My DUI Arraignment?

You have the option to either represent yourself, hire a private lawyer, or be appointed a public defender by the court.

If you want to maximize your chance for the best possible outcome it’s always advisable you hire a lawyer before your arraignment. The better your lawyer, meaning the more experience he or she has with DUI cases and their track record, the better too. Law is complicated for civilians with no experience in the system, and DUI laws, in particular, are very complex. It’s never advisable you try to represent yourself, no matter how serious the case may be.

Private lawyers are statistically more likely to secure a better outcome for you than a court-appointed public defender. There’s truth in the saying “you get what you paid for,” so paying out of pocket for a lawyer, and the best possible lawyer you can afford can make a difference to your outcome.

You must remember how much is on the line and the possible sentencing you face. Ask yourself how much losing your license means to you. Or, how will spending time behind bars affect the rest of your life, such as family relationships and your job status?

Another important reason to have a lawyer is that you are much more likely to be offered a plea bargain, which can help resolve your case a lot sooner and with an outcome you’re happy with.

Plea bargains are typically offered when the prosecutor feels like the defendant has a good chance of beating his or her charge. Which is much more likely with an experienced lawyer at your side.

There is also the chance that your lawyer will find a mistake made by the police or another legal loophole that gets your case dismissed. It’s not impossible, but it’s fair to say that there is almost zero chance of you being able to get your case dismissed on a technicality without a thorough understanding of the legal system.

How Will Your Lawyer Prepare for the Arraignment?

The role of a lawyer is to examine all the evidence relating to your arrest. Some approach it by start looking for mistakes made by the arresting officers. Others seek loopholes in the law. In general, an attorney wants to find ways to build a defense strategy that will dismiss your case. If your case won’t be dismissed, they want to make your sentence as minimal as possible.

This means spending time chasing down all the paperwork filed about your arrest, talking to witnesses and officers involved, if necessary. You will need to put together an orderly case to present to the judge.

If you’re being held in jail waiting for your arraignment, it’s not even going to be possible for you to put in the time to physically chase down the information you need as a lawyer can.

How Should You Prepare for a Rhode Island DUI Arraignment?

Your DUI lawyer will help you prepare for your arraignment, assuming you have one. He or she will talk you through what to expect from the arraignment, the possible punishments, what is expected from you, and will answer any questions you may have.

If you do not have a lawyer for any reason, you are going to be on your own.  The best you can do is to be familiar with all the facts of the case and be prepared to answer any questions the judge will ask you, honestly.

You’re more than likely going to be guided by the legal system without the help of a lawyer defending you. You will have to be more reactive than proactive, and this is the main issue with trying to defend yourself.

What Is the Process of a  Rhode Island DUI Arraignment?

It’s important not to get too stressed or anxious about the process. Although that’s easier said than done, you need to trust that your lawyer will do the best possible job. Therefore there is nothing more you can do at this point.

Your lawyer will do most of the talking for you. You don’t need to worry about saying something that might get you in more trouble. They will present all the information they’ve gathered to help your case. They will discuss the best way to proceed with the prosecution. It’s a nice peace of mind knowing he or she can answer any legal questions directed at you.

A Rhode Island DUI Lawyer Will Defend Your Rights

It’s important to be well-prepared and have a good lawyer when you attend a DUI arraignment. The arraignment is one of the first and among the most important steps in the legal process.

It’s at this point where you and the best DUI defense lawyers in RI like S. Joshua Macktaz, Esq. can negotiate a plea deal in your favor, and you can potentially walk away or set yourself up for a lesser sentence than you would face if you tried to represent yourself.