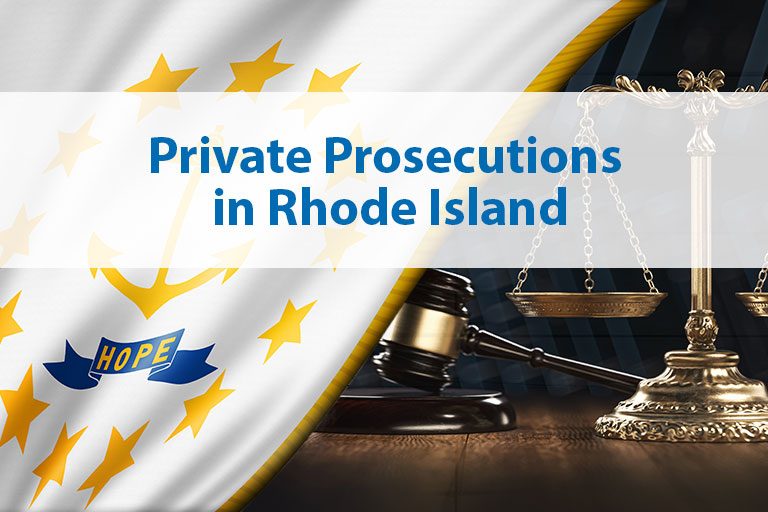 Police officers are here to help. We all learned this basic fact at some point in our childhoods. If you’re the victim of a crime, all you have to do is notify the police. They’ll help you through the process of formally filing charges. Right?

Unfortunately, this isn’t always the case. There are quite a few crimes the police just won’t pursue or investigate.

The reasons for this are many. Maybe they just aren’t finding enough evidence. Maybe the accused is involved in a bigger case, and law enforcement officials are focusing on that. Either way, a lack of police assistance usually means your journey for justice is over.

But here in Rhode Island, you have another option. RI is the only state in the country where you’re allowed to hire a private lawyer to prosecute a misdemeanor case when the police won’t do it.  This has been the law of the land in Rhode Island for over 100 years.

You’ve probably got a lot of questions about how to go about this. That’s why I put together this guide on private prosecutions in RI. In just a couple minutes, you’ll know all about this unique path forward.

The Process for Private Prosecutions in RI

The exact private prosecution process varies slightly from case to case. There are a wide range of misdemeanors—and an even wider range of reasons the police might not get involved.

These factors all impact the details of your private prosecution. That said, here’s the general series of steps you can expect:

1. An alleged misdemeanor negatively affects you.

2. The police decline to arrest or charge the defendant.

Maybe there’s not enough evidence, or no clear probable cause. Whatever the reason, no charges/complaints are formally filed.

3. File a complaint with a judge in District Court.

You’ll take matters into your own hands and file a private complaint. The Rhode Island Supreme Court has ruled this is 100% legal, including whatever sentence the judge decides.

4. Your privately employed counsel prosecutes the charge(s) against the defendant.

This step looks very similar to what you might call a “normal” or state-driven prosecution. Your lawyer will gather evidence and build a case against the defendant.

5. Both sides make their arguments, and the judge/jury arrives at a verdict.

Like other trials, the defendant can choose to waive their right to a jury. If they do so, both sides will make their arguments directly to the judge.

6. If found guilty, the defendant is sentenced. They have the right to an appeal just like any other trial.

The judge overseeing a private prosecution has the same authority they do in any other courtroom. They’ll issue a sentence based on the charges and state law. The defendant can then appeal the verdict if they disagree.

What are the Reasons of a Private Prosecution?

The most basic reason for a private prosecution is that you have a criminal complaint the police won’t pursue.

The easiest way to explain this is by looking at one of the most well-known private prosecutions in RI, which was prosecuted by myself and another lawyer. In 1996, a married couple—the Cronans—had a violent incident. Mr. Cronan kicked, hit, and dragged his wife across the house. A week later, the local police came to serve Mr. Cronan with an ex parte eviction notice.

Upon examining Mrs. Cronan’s bruises, they told her to file a complaint at the station… but they never arrested Mr. Cronan for the assault. Because he was never arrested, he couldn’t be charged by the state.

Instead, Mrs. Cronan took him to court with her own private prosecutor.

They appeared before a trial justice, who found Mr. Cronan guilty. He tried to challenge the conviction with the RI Supreme Court. They ruled that a private prosecution like this was completely legal. Today, private prosecutions in RI are still legal and valid.

Basically, you can file a private criminal complaint with District Court for any misdemeanor the police won’t pursue.  Rhode Island is the only state in the United States that allows private prosecutions.

What are the Requirements for Private Prosecutions in RI?

The requirements for private prosecutions in RI are:

Let’s take another quick look at Cronan vs. Cronan. Mrs. Cronan filed her complaint with the District Court. Because the assault was punishable by more than 6 months in jail, the case was sent to Superior Court.

Mr. Cronan chose not to have a jury at trial—just a judge. As state prosecutors began to process the paperwork and set a trial date, Mrs. Cronan made them aware of her own private lawyers and their willingness to handle the case themselves.

The Attorney General’s office, seeing that Mrs. Cronan was fully prepared, allowed her to move forward with the private prosecution. Mr. Cronan made no objection, and the rest is history.

I tell you this story to illustrate the benefit of hiring private counsel before you get started. Things go more smoothly when you’ve got an expert in your corner.

Who Can Bring a Private Prosecution?

All private citizens of Rhode Island can bring a private prosecution. The Supreme Court’s ruling states any district court judge may place any criminal complaint on file, barring 2 exceptions.

The first exception relates to felonies. If you’re trying to file a felony complaint, or the defendant has a past felony conviction, you can’t bring a private prosecution against them. Felonies are handled by state prosecutors.

Other private complaints are the second exception. If the defendant has been convicted on a past private complaint, you can’t bring a private prosecution against them. The state would need to file both felony and misdemeanor complaints in this scenario.

How Do You Start a Private Prosecution?

You start a private prosecution by filing a private complaint with the Rhode Island District Court. But it’s a bit more complicated than filling out a form.

Once you make the complaint, a judge needs to place it on file. This process can look very different depending on the specific misdemeanor committed, and the judge you meet with.

That’s why the best first step is contacting an experienced and successful lawyer who’s familiar with private prosecutions in RI. You see, lawyers, judges, and police officers often send their friends and family my way. I see and talk with these people daily.

You can’t bring a private prosecution without hiring private representation. With me by your side, you can always feel confident knowing the next steps in your case. I don’t send my associates to court—it’ll always be me standing next to you.

I’m available 24/7 because crimes don’t just happen during business hours. Call me now at (401) 861-1155 for your free consultation and case walk-through.