Home » Shoplifting Charges: What They Mean For You

Shoplifting Charges: What They Mean For You 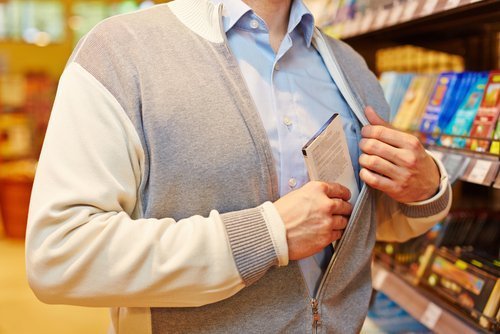 It’s pretty commonplace to hear about shoplifting on the news and see it portrayed in entertainment. You have probably seen news stories about how people would shoplift from local stores and sell their ill-gotten gains on eBay. There was almost an international incident when some prominent college students were allegedly shoplifting while visiting another country. Many coming of age tales in books, film, and television talk about youthful indiscretions of taking items from a store. You may find it surprising to learn that shoplifting is a complex topic and that shoplifting charges should be taken very seriously.

The first thing that you think of when you hear the word shoplifting is someone putting an item from a store into their pocket or purse and walking off with it. This situation is a classic example of someone getting shifting charges against them. In Rhode Island, you only have to walk past where the cashiers are located to receive shoplifting charges.

There are actually some situations that may surprise you to find out that they constitute shoplifting. For instance, in Rhode Island taking a shopping cart from the premise of a store is shoplifting and can result in shoplifting charges. In addition, you can still pay for a purchase and have it recognized as shoplifting. In order to get shoplifting charges in this instance, you have to change the price of the product. This situation means you changed the price tag or removed it to get a better price.

One final area of shoplifting that often gets overlooked is theft by employees. The staff of a retail store can also see shoplifting charges if they take property from the store without paying for it. Employee shoplifting can be a real problem for employers. Employees can face many of the same consequences as anyone else that steals from a store.

How Does It Differ From Other Types of Theft?

Shoplifting is a type of theft, and as such, the severity of the charges typically depends on the value of the objects. Usually, a person can see shoplifting charges against them as a misdemeanor or a felony depending on the seriousness. However, a person that has prior theft convictions may find that their shoplifting charges are more severe than someone that has never been through the system previously.

What Are Some Charges Associated With Shoplifting?

There are a number of charges that can happen in addition to shoplifting charges depending on the situation. Theft, receiving stolen property, burglary, grand theft, petty theft, larceny, and more may be additional charges. What may seem like somewhat harmless shoplifting charges could potentially become something much more serious.

What Are Some Consequences of Shoplifting Charges?

There are typically two types of consequences when it comes to shoplifting charges.

There are the criminal charges that can result from shoplifting. A person can see charges of either misdemeanor or felony shoplifting. Felony is going to be the more severe of the two charges, of course. A person that is found guilty of felony shoplifting can receive a fine between $500 and $5000, up to five years in prison, or both the fine and prison sentence.

Shoplifting charges can also have a civil restitution component. This component means that they can pay up to three times the value of the merchandise if the store does not get it back. They can also be responsible for paying a fine of at least a hundred dollars, but not more than the maximum of $500. The person must also pay any court costs involved with the case. A person doesn’t have to have a conviction for shoplifting charges or plead guilty to have a civil suit against them.

How Can an Attorney Help Argue Your Side?

Getting caught red-handed may make it seem as though there’s no hope for you. The store found you with the item that wasn’t paid for, or you made a change in the price. The truth is that an attorney can help you through this process in securing the best possible outcome for you. Not every situation is the same. Maybe you didn’t get a cart and couldn’t carry everything in your hands. Then, you forgot that item you couldn’t carry as you walked out of the store. Maybe this is your first time, and you weren’t aware that taking a shopping cart home is shoplifting. No matter your circumstances, an attorney can help you with the best defense possible.

It can be wrong to assume that shoplifting charges against you aren’t serious, but it can also be wrong to think that you’re beyond hope. Contacting criminal defense lawyer S. Joshua Macktaz, Esq. can be the best first step that you can take to protecting your rights in this matter. We can go over the specifics of your case, and find the best defense possible for you.